The Singaporean, Girl: A Spanking Short 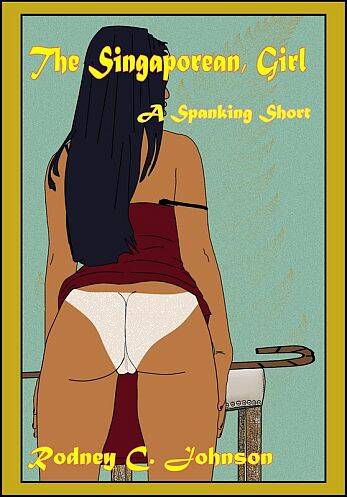 New neighbors move into Redwood Apartments, beautiful Bo Yang, and her strict mother. Much to long time resident “Old Man” Calvin Summers pleasure, who gets an education in cultural differences upon striking up a close friendship with the two women.

[Bo Yang, 22]
The occupants of 7C moved in over the weekend, Saturday, twelve noon, on the dot. “Old Man” Calvin Summers, long time resident of Redwood Apartments, just arrived back home from sharing a round of drinks at his local VFW Hall with his buddies, met one of his new neighbors. “Here, let me help you with that, young lady.” Calvin said, and caught hold of the box that the pretty girl nearly dropped in her try to push open the apartment door, while balancing the unwieldy box.
The girl, Asian and undeniably gorgeous! Any man, in particular, an oldster like Calvin, couldn’t help but stop and take a good gander. Her long black hair fell straight down her back. She wore jeans, and a T-shirt, that hugged perky breasts. Never mind, her cheerful smile. That alone would have gotten Calvin’s attention.
“Thank you,” said the girl in faintly accented English.
“Hello,” said Calvin. “I’m Calvin Summers, looks as if we share a wall.”
Again, the girl grinned. “Nice to meet you, Mr. Summers –”
“Calvin’s OK, sweetheart.” Calvin insisted. “Or, well most people around here call me ‘Old Man’. Don’t know why exactly, there are older guys besides me, living in Redwood. Guess, I’m like everyone’s grand pappy. But please, stick with Calvin.”
The girl didn’t seem at ease, addressing Calvin, as anything but ‘Mr.’, however she introduced herself. “Hello.” Offered her hand. “I’m, Bo Yang…” In the next room, a voice called out in Chinese. “And that’s my Mom. She’s not so good at English. We’re working on it.” Bo promised. “We just came to the USA, from Singapore.”
Mrs. Yang appeared from out a bedroom, and spoke to her daughter in a rush of Chinese, Calvin couldn’t hope to understand, or keep up with. Bo made a few gestures, and explained Calvin was a neighbor, who’d assisted her with a box that she almost dropped. This seemed to satisfy Mrs. Yang, who warmly greeted Calvin, the best she could, without being able to thank him in English.
“Mom, says, ‘Thanks, for helping my clumsy daughter’.” Bo offered for Calvin’s sake, and tried not to roll her big brown eyes.
Having nothing more interesting to do, and honestly not really wanting to part company with the beautiful young woman, Calvin offered and stayed to lug more boxes up from Bo’s beat up, old powder blue Volkswagen van.
During a break between hefting boxes, Mrs. Yang made everyone tea.
Mrs. Yang, hadn’t been teasing, exactly, when she called Bo, ‘Clumsy’. On at least three occasions, the girl blundered over a box she’d haphazardly stacked. The third time, the contents spilled out onto an already cluttered floor.
One of the objects in the moving box, a three-foot, thick, crook handled piece of rattan. Bo quickly glanced to see if Mr. Summers noticed, he hadn’t seemed to. She scooped up the cane, along with a handful of her clothing, coats, mostly and shoved it all into her not yet arranged bedroom before anyone could see.
Tuesday evening, following the Yang’s move, Calvin brought a basket of his laundry to the communal laundromat, where he ran into, folding, and doing she and Mrs. Yang’s clothing, Bo, in the midst of sorting varied color, lacy underwear.
“Mr. Summers!” Bo greeted, sounding her typical buoyant self. “How was your day?” Without asking, took his basket and selected a machine, as if it were something she’d always done and tossed his laundry in, using her own soap, placed quarters in and started the washing cycle. “Mom’s glad to have had your help, move us in.” Bo explained. “We’ve nearly everything unboxed already.” Singsong-like. “Can you believe it?”
Calvin couldn’t get a word in. Instead, he enjoyed listening to Bo talk. He’d noticed the girl to be more hushed around her mother. Otherwise, Bo tended to chatter on nonstop. Which didn’t bother him in the least. Bo had a very pleasant, soothing feminine voice.
“Got a date?” Calvin wondered, when he bumped into Bo as he returned home, leaving her apartment dressed in a formfitting dress, which accentuated all Bo’s womanly bits. Bo, being somewhat tiny, however thanks to chunky shoes, gained a few inches. Calvin praised. “You’re very pretty, tonight.” Who was he kidding? Bo’d be pretty wearing anything. Often, she did wear casual clothes and always came off as stunning. “You’ll make him melt!”
Bo, who appeared as if she’d recently been crying, said. “No Mr. Summers.” Managed a bright smile. “I’m going to work.”
“Where’s that?”
“The Blue Moon Bistro.” Bo said. “I’m a hostess.”
“Must have just started, I take it?
“Second week.” Bo said demurely.
“Bo?” Calvin couldn’t shake the sense, Bo was upset. “Everything, alright?”
“Fine Mr. Summers.” Bo, timidly bit her lower lip. “Mom and I just had an argument. Nothing important.” Glancing at her phone, in that gorgeous singsong voice, exclaimed. “Got to go, bye! See you later!” ...