Synthetic, Electric Romance (A Story of The Federal Galactic Empire) 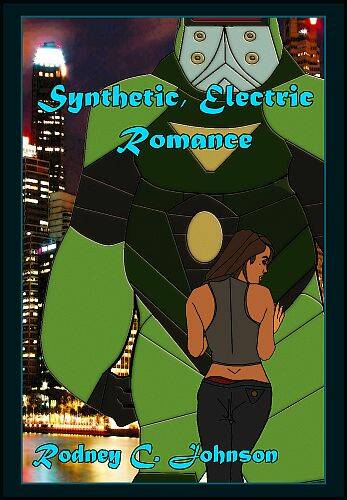 
Sarina Rubik, is madly in love. Her guy Cylus, a broke down, Tank-Class Sentinel, loved her back with his every circuit. Yet Sarina, prone to trouble, walks right into a conspiracy on the Morningstar planet Gear. Why are fembots vanishing? Who is the Shredder? Most of all. What are the green skinned Humanoids that lurch around in Volt’s shadows?

Table of Contents
Epigraph
Chapter 1. A Girl, And Her Mecha
Chapter 2. Devil In The Details
Chapter 3. All The Women Came And Went…
Dramatis Personae
TERMS OF INTEREST
Also By…
About The Author

Transition from mankind, into Hybrid, Morningstar offspring, did not come about as an abrupt traumatic occurrence. For a single reason. Homo Sapiens are prone to randomness, which we, as designed Robots lack. Both in our psyche and SNA. This tendency for entropy attracted us to you. Following a continuum, Neo-humans forged ahead, where Homo Sapiens ended. Everything from routine tasks, to falling in love.
— Roark Dallas, The Architect