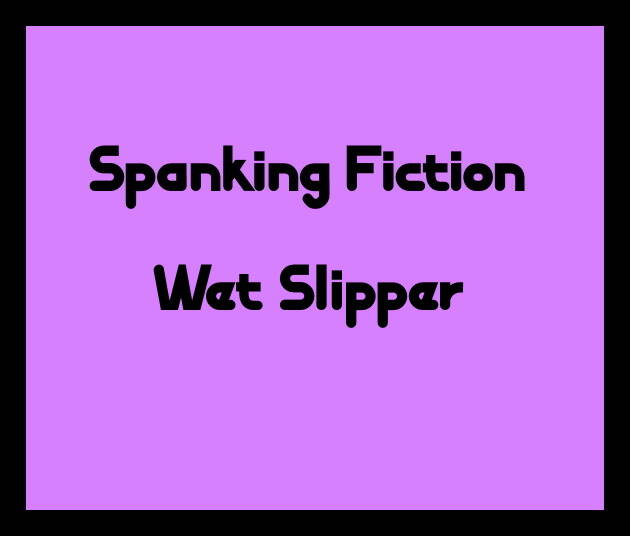 Justene, breaks her daddy's rules, and is sent to wait completely bare over his sturdy workbench, out in the garage for a sound does of the soaked slipper.

[Justene Blackthorne, 20]
Justene pushed her cotton knickers down, and off, stepped out of the scant fabric and bent herself over the sturdy workbench out in the garage; her lithe bronze body stretched forward, forcing her up onto her pink toenails as she reached for the far end of the heavy wooden table, generous breasts compressed onto the hard surface, bared for her punishment.

Now to just wait for daddy. God, how she hated the slipper, Justene almost would prefer ten strokes of the cane rather than taking a walloping with her dad's waterlogged carpet slipper. He knew how to make it hurt. His secret to achieving an extraordinary painful slippered butt was to let the brown slipper soak in water. And just not any old water, but salted water, which in Justene's considerable opinion made it sting all that much more. Certainly a good whacking with the wet shoe always caused her apple-bum to burn.

This particular spanking, all because Justene went out to a party that she'd been told not to go to. It wasn’t fair! Though now that she lay nude over the workbench waiting, guessed she was lucky that all she would be enduring was the slipper and not also the cane. Of course the evening was not yet done. Justene, knew if she put up too much of a fuss, a few strokes from the yellow rattan would be in store as a compliment to the slipper.
Daddy entered the carport, didn't say a word. No need, Justene knew why she was going to get spanked; anyway, he wasn't the type to lecture. One warning and it that was it; you were either caned, or sent out to await bent over his workbench.

The slipper lifted out of the bucket which it soaked in, dribbled water. Justene's father twisted the sole to squeeze out some of the extra liquid and then tapped the slipper firmly against her rump. She tensed, then a loud mushy whop compelled Justene to pitch forward, grip tighter. Her pelvis forced hard onto the wooden table edge, pubic hair seemed to tingle, and she let out a loud yelp.

Whop, the slipper landed once more, Justene's light-brown hair billowed all over as she fought to keep in place. Whomp! Her butt cheeks flattened under the impact. And then he cruelly struck between her opened legs with the soaked implement. Each whack dampened her backside making her wet, but not in the way she liked it. Another few slaps close to her pussy and Justene pleaded for the horrible punishment to stop.
But it didn't. Justene's daddy kept up his walloping of his naughty little girl. He spanked her with the wet slipper until her bottom turned a bright hot crimson.

The spanks continued on, sprayed water across the garage at their heavy impact, which of course why unlike a caning, the slipper was given out here. Though that didn't mean there wouldn't be nude corner later. No her daddy would bring her back into the house and probably place Justene in the corner with one last hard smack to her already blistered hindquarters. Not exactly what Justene was looking forward to.

At last told to get up, Justene placed her hands atop her head, though she urgently wanted to rub at her scorched bottom in order to try to make the sting go away. It really burned, so she danced where she stood, boobs all a jiggle, nipples obscenely erect. Justene shifted her weight from one foot to another. Tears streamed down her exotic face unabated. Inner thighs and ass glistened, wet and a burning cherry-red.