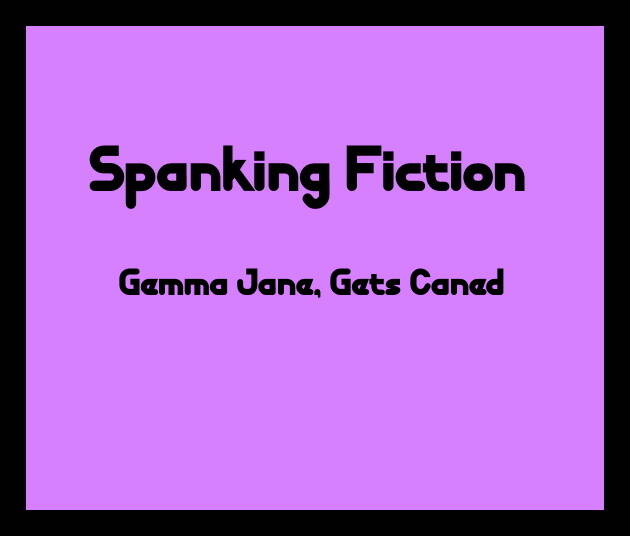 Gemma Jane Mawby went to Sunday brunch with her family, but couldn't keep from being rude, thus she earns a sound thrashing upon returning home.

Eighteen year-old, Gemma Jane, anxiously gnawed on a balled fist, and fussed “I should have kept my bloody, damned mouth shut!” She fumed. Pouty, bubblegum pink lips trembled as she stood alone in the corner, waiting. Goddamn, the waiting. Ah, maybe she should stop cursing? After all, that's how Gemma Jane got herself into this mess to begin with.

Profanity, and being very argumentative.

Yup. That was gorgeous, headstrong Gemma Jane. She never took no for an answer. Particularly, these days, when 'No' more often than not had been issued from her parents. Mum, normally came head to head with her obstinate daughter over clothes, boys and lately, almost anything else. Even small, insignificant stuff.

Today had just been typical.

Right. You want to know what landed Gemma Jane, put in the lounge's corner, stripped-off, down to only scanty lace maroon knickers, bra and hold-up stockings?

Her iPhone, that's what.

Out at Sunday brunch with her entire family, Gemma Jane couldn't help herself. Like every other young woman of her generation, Gemma Jane's mobile positively was glued to her palm. All during lunch and tea, Gemma Jane kept texting, as well as playing games. Gemma Jane, it should be mentioned, would be the first to admit, she was just a tad addicted to Candy Crush Saga.

Of course, Gemma Jane's Mum became quite annoyed that her daughter remained absorbed in her iPhone, when she should have been participating in Sunday brunch. Nicely, at least Gemma Jane's Mum, Chloe believed herself to have been more than kind, certainly not confrontational about the request, asked Gemma Jane to put away her mobile. Not that Chloe thought such mattered. She was Gemma Jane's Mum, so what she said, went.

In the end, it all became an argument. Gemma Jane, told her Mum to. “Go piss off!”

Chloe Mawby, made a very public show of informing her wayward, foul mouthed daughter, that upon returning home, she was to strip-off and wait in the lounge to be thoroughly thrashed for her poor behavior. This public castigation mortified Gemma Jane and made her blush a 100 shades of crimson. Perfect strangers were now aware she'd get a proper thrashing, as her Mum put it, once her family departed the posh restaurant.

Prompted by a spank to her jean covered rump, seconds upon going inside the house, Gemma Jane had been instructed to strip-off to bra and panties. Seriously, Gemma Jane didn't even make it through the threshold before her Mum delivered a hard smack.

“FUCK!” Gemma Jane expressed her discomfort by cursing and yelping her way down the long hallway toward the lounge.

On a number of occasions, Gemma Jane had been told she'd the body of a pin-up girl and that she should consider modeling. Page 3 loomed in her future. Indeed, Gemma Jane fit the buxom category quite good. Hills and valleys were in all the correct places and in appealing proportions, both above and below her equator. She liked herself. It could even be said, Gemma Jane didn't much care for clothes. Lifting her tight, boob intensifying top over head however, while stumbling out of thick heels and jeans didn't at this particular moment feel liberating.

“Young, lady,” said Chloe Mawby. “You're supposed to have your hands on your head.”

Gemma Jane gasped, removed her balled fist from her lush, quivering lips, to quickly return her hands onto her crown of straight light brown hair.

Though Gemma Jane tried not to glance over her shoulder, she couldn't help but peek around. She let out an exasperated sigh, realizing once again, her Mum had left the room. Not, mind you, that Gemma Jane wanted to be caned mind, but she did desire to get it over and done. A part of her hoped she could yet talk herself out of the thrashing.

At this point, Gemma Jane was having a real hard time feigning respect. “Mum, please.” She began not at all contrite. “I --”

To which, Gemma Jane let out a muffled groan, yet took a feline like stride across the lounge, toward where the lengthy rattan cane was kept in a corner cupboard.

“OK. Let's have those knickers off.” Chloe reached for her daughter's lacy maroon panties.

Chloe exhaled. If it were the last thing she did, Gemma Jane would learn to do as she was told without an argument. She grabbed her daughters' arm. “I'd intended to only give you six strokes, but after that display, it'll now be twelve.” She guided Gemma Jane over to an overstuffed blue leather chair where thrashings in the Mawby household were traditionally administered. Pulling on the garments strap, Chloe ordered. “Take off your bra.”

Sighing, Gemma Jane reached back and unclasped her maroon bra; let it drop forward off her shoulders and 70F tits hang loose.

In the meantime, Chloe Mawby flexed the wicked cane; she bent it a few times into an almost perfect loop. Gemma Jane knew from countless, painful experience, that the implement was quite flexible and would do serious damage to her ass.

Coming to terms with her predicament, Gemma Jane submitted to the required punishment position by bending low, elbows on the seat of the big blue leather chair, soft breasts dangled, and nipples brushed against cool leather, taut butt out thrust. Chloe Mawby reached for her daughter's lacy heart covered knickers and pulled the underwear down past stocking tops, inside out to Gemma Jane's knees. Gemma Jane and her elder sister, Aimee were never caned without at least one article of clothing on. More often than not, that meant tops or bras on, though, on occasion, when the miscreant could be willful, they were ordered to go bare breasted. Panties however would remain at half-mast. To Gemma Jane, this tended to be worse than if she were totally nude. Her panties in a tangle and her legs opened made her feel profoundly exposed.

“OW!” Screeched Gemma Jane when the rod snapped across her lower parts, close to the join of butt and leg. The tip bit really hard. Gemma Jane sobbed.

Mrs. Mawby intended to be thorough and did not rush the caning. She worked her way up Gemma Jane's rear end, which jerked and bucked, even lifting up on her toes to expose stocking covered soles as she screeched under the lashing.

By the seventh stroke, Gemma Jane couldn't help but jump upward, and clutch her bruised, sore cheeks. Tears freely flowed from out of beautiful blue eyes. Lucky for her, she wore waterproof mascara. “Shit!”

Chloe though wasn't moved. “Gemma Jane, we are not done.”

But to no avail.

“No. You've been badly behaved lately. So, no I shall not let you off.” And Mrs. Mawby explained to her daughter. “There shall be extra for getting up and swearing.” Mrs. Mawby tapped the cane on Gemma Jane's shoulder, who could only weep. “I've got all evening. I suggest you get this over with.”

Thud, thud, thud. The cane beat a drumbeat up and down Gemma Jane's buttocks, resulting in overlapped welts, to end in two cross strokes that hurt like blazes. 18 strokes, the most severe caning Gemma Jane to date ever got.

After spending another 15 minutes in the corner, swollen, bruised hindquarters on display, Gemma Jane was permitted to collect her clothes and go to her room.

On the way, she encountered her father, who gave his naughty little girl a sympathetic look. Gemma Jane however had been very glad to not have been caned by him, thrashings hurt a great deal more when dealt out by his powerful hands. “Mum really tore you up my girl.”

“Let’s not see any more of what you did at brunch. OK?”

In her room, Gemma Jane found herself a mint green nightie and sprawled out on her bed, where the fat puffy white Angora cat, Samson already curled up. She massaged her whipped butt. The stinging pain eventually would become an aching burn by tomorrow. “FUCK!” Gemma Jane remembered. “I've tennis Monday.” Aside from the ache, her too short tennis skirts were sure to make her workout, interesting, to say the least.