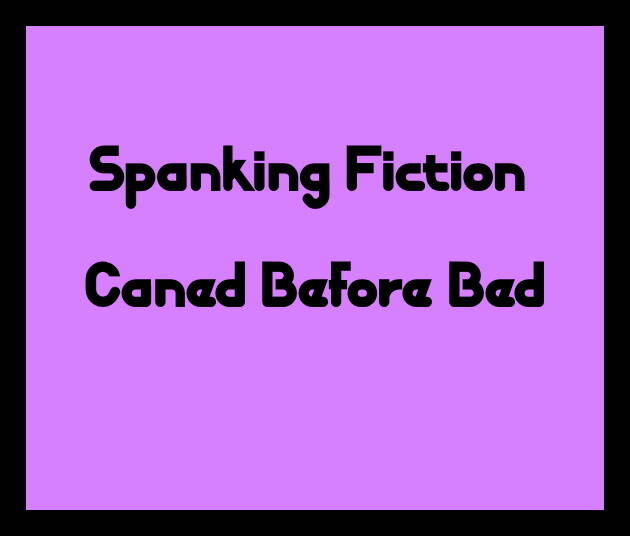 Tanya, waits for her daddy to come up the stairs and cane her for maxing out his credit card on stupid things like CDs when she was supposed to purchase new things for school.

Tanya Strutt closed the door to her room, reached behind her and began to unfasten her tight beige skirt. She pulled the clinging sheath down her nylon covered legs and kicked it aside letting out a sigh. How could she be so stupid, over charging her father’s credit card for all those CDs?
For a moment she stood in her bedroom and glanced around nervously looking at the pink wallpaper and Hello Kitty motif in nothing but smoky-black stockings and white, pink-striped shirt.
He’d be up here soon to punish her, Tanya was sure it’d be at least six, she never got less, and that usually took a half hour, and always on the bare. This was likely to take longer. Tanya was sure she was going to get more, it could even be twelve, or if Daddy thought it more effective, he might apply twenty-four stinging strokes.
It was 9:00 PM on the dot.
The nineteen year-old went over, sat on her bed, and unbuttoned her top exposing, 34B-Cup breasts in a royal blue bra with white frills purchased recently from Victoria’s Secret, the same day in fact that she went and maxed out Daddy’s credit card.
Daddy loved her, but he could be strict, very strict when she was naughty. Almost always for her infractions she either got spanked over his knee, or caned. Not even a good pout could spare her a sound thrashing when she had been naughty.
Tanya threw her strappy shoes aside, crossed her legs and waited for the dreadful sound of Daddy’s ascent up the stairs to her room. Clomp, clomp, clomp came the heavy footsteps. Mr. Strutt walked up the stairs, and reached his daughters door. “Tanya” her daddy spoke sternly. “I gave you that charge card to purchase effects for University, not waste on a night out with friends and certainly not for toys and goodies.” He admonished went over and took down the straight Kaboo cane from where it rested on her dresser. It was a dreadful, whippy thing, not much thicker than her pointer finger, nearly forty inches in length, and it stung like hell. “Now young lady you know what’s expected of you. Stand up, knickers down and touch your toes.” He ordered tapping the rod in his hand.
Brushing her hand through auburn hair Tanya looked at her father with big pleading eyes, she begged: “Please daddy I’ll pay you back, please don’t thrash me!”
“Tanya if you don’t bare you bum and touch your toes I’ll add extra, and maybe even apply a bit of the tawse.” He took her by the arm and pulled her to the center of her room.
Tears glistened in the corner of her blue eyes, Tanya sighed placed her thumps in the black waistband of her panties and eased them down over her shapely tanned hips, past her garter straps to the back of her knees. A perfect, well trimmed “airstrip” of red-brown pubic hair soon was exposed. Spreading her feet apart a few inches to balance herself Tanya leaned down, touched her toes, felt the pink carpet underneath her feet.
Tap, tap, tap. The rattan touched her most intimate parts, the tip glanced past her pussy causing her to shutter and clench her bottom cheeks in dread. This position left her so exposed.
Tanya continued to stair at her toes, fixated on the seam in her stockings. Involuntarily she moved her toes, felt the pile of the carpet…
Whack!
“Ouch!” Tanya began to stand stopped herself trying not to get out of position. The burning pain made its way through her body.
Whack! This time it was lower, and Tanya let out a wail.
Whack! Whack! The Kaboo cane struck higher, Tanya cried more.
There was a pause and the girl moved her brown hair out of her face wipe away tears.
“We’re not done yet Tanya. Keep touching those toes.” Said her daddy and tapped the rod on her wealed ass, each touch evoking an aching pain all its own.
Tanya tried to focus on her toes, but the pain was overwhelming. She wanted to lay down, and for the terrible weapon to stop ripping into her sore bottom. What time was it?
Whack!
Tanya let out s long wail pleaded with her daddy to stop caning her. She’d be a good girl she promised. “It hurts.”
“That’s the point.” Daddy informed, applying the rod three more times across his little minx of a daughter, which caused Tanya to let out more yelps.
Blue eyes filled with tears, auburn hair in total disarray Tanya Strutt wobbled in her humiliating position. Her butt on fire, she didn’t dare touch it.
Whack! “Ouch! Please stop daddy!”
Whack! “Arrgh!”, an exhale of breath.
Whack!
Tanya wobbled, began to kneel, and fall out of position at last.
“Butt up, touch your toes.”
Obeying Tanya placed her French Manicured nails onto her stocking clad toes, brunette hair all over the place.
Whack!
Whack!
Whack!
The Kaboo cane ripped into Tanya’s bare butt, leaving it a mess of reddened welts and tramlines.
“Stand up Tanya.” Mr. Strutt helped his daughter stand, kissed her forehead, then replaced the instrument of punishment back onto his daughter’s dresser. “Go to bed.”
Rubbing her aching, fiery ass, Tanya moved back the covers on her bed found that it was now 11:30. Had her punishment really taken so long? She must have been putting up more of a fight than what she’d realized. Given the severity of it, that must have been it.
Tanya, would try to be a good girl from now on.