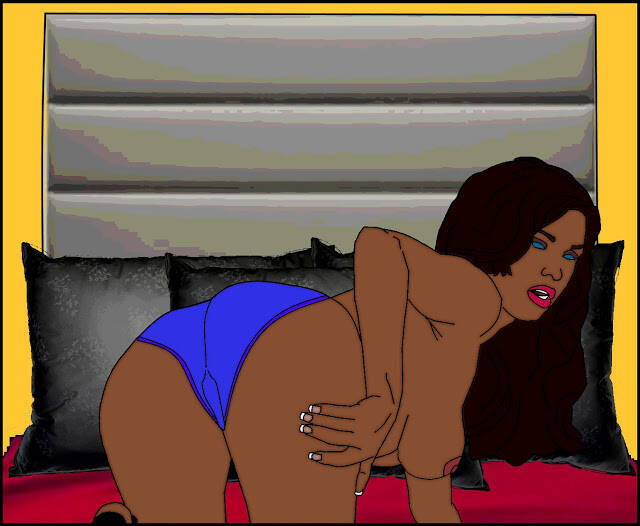 Sharr Khan, deflowers his girlfriend, completely unaware she is more than human.

Sharr pumped out and in of his girlfriend’s moist pussy. Groaned as he released an explosion of warm sticky ejaculate. Nadia writhed on the mattress: Moaned, breasts wobbled, auburn hair in disarray all over the pillows, lower half of her body lifted upward while she supported herself on elbows, palms flat on the bed. A posture that exposed her derriere and pussy, and afforded him ready entrance into her waiting slit.


Sharr held onto her legs and jackhammered. To his tremendous pleasure, Nadia proved to be very bendable, quite flexible, not to mention, particularly strong, able to maintain the awkward position with little effort, which let him deploy his complete focus to his thrusts. Pleased by the pop he heard as her pussy let go of his cock, Sharr pulled out, but kept his hold on Nadia’s legs. This posture held her slit still upward and open. He gazed into her bright blue eyes, where he noticed a post-copulation afterglow. Tightened in a fist, Sharr still clutched Nadia’s flimsy lace blue panties which he’d torn off along with the rest of her clothes.

It took place all of a sudden. Nadia goaded him, in an unconcealed effort to bring Sharr out of one of his brooding, introverted moods. Next thing he knew, amid the bickering, Sharr began to rip off her clothes. First her top, which Sharr was sure he’d popped off all the buttons on. Next, Nadia’s sheath of a black pencil skirt, the matching blue bra followed, Nadia helped push that off and then he lifted her onto his mattress.

Blood, far more than he thought there probably should have been puddled on the Egyptian cotton sheets and blotched her genitalia as well as his own. Little did he know, Nadia wasn’t human and this gush of blood proved normal for a virginal Morningstar female. He hadn’t used a condom. This hadn’t been planned. At least, not by him. Sharr, had he known would not have been so… Aggressive, even animal like about it. This should have been a gentle experience.“You’re a virgin.”

“Well,” Nadia said in a mellow sigh with a barely restrained sideways grin. “I was.” She giggled. “Not anymore.” Deep sigh. “Thanks for that.”

“I think its sweet you think that, but not necessary.” Nadia licked her lips. She had intentionally prodded out his inner dragon. Though of course she understood why he maintained a rigid, almost aloof control of his emotions, but none of that was required with her. Sooner or later, her boyfriend needed to accept that fact. She was his, body and soul. “Nothing took place that I didn’t want to have happen.” Nadia rolled atop of him, let her generous breasts hang in his face, budded nipples brushed on his cheek. “You were treating me like — Like a glass doll.” Smiled. Thought: If he only knew, I’m built from moissanite! “See, you can’t break me.” Happily kissed him. “I’m yours. I wanted you, and I wanted you unhindered.”