Radiun90 (Or, The Android Bat) 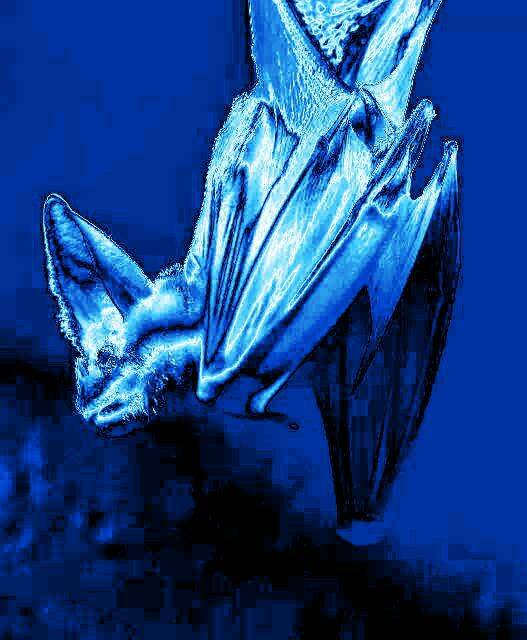 Blood I will mass and cause bones to be.

I will establish a savage, `man’ shall be his name.

truly, savage-man I will create.

He shall be charged with the service of the gods

“And the bright blue eyes, are those because you could do it as well?”

“Of course,” he laughed. “And besides, I like blue.” Dr. Turhan Korelia kissed his wife, who stood beside him in their basement laboratory. On the table rested a big brass cage, where the bat hung, stark white, large, with startlingly blue eyes. The chiroptera looked as if it might be wayward fauna transplanted from another planet. Indeed, given what they were proposing to do with the new material, this synthetic bat deserved a species classification all of its own. “I wanted to see how malleable Radiun90 could be. Turns out, it’s very pliant. The bat… I mean, ‘Garuda’, fitting name,” he smiled. “Had unlimited potential, could become whatever I wished for it to resemble. Were I to have let my imagination truly get away from me, it might have turned out quite exotic.”


“Radiun…” Dr. Ambika Sen proclaimed exasperated. “Radiun! Of all the designations, why that?” She railed, clearly not pleased with his selection of label for the new material. “Why not just call it the Frankenstein Element, and be bloody done with it?”

Turhan couldn’t stop himself, he began to laugh.

“It’s not funny,” Ambika pushed him. “To call this marvelous material, after that hideous Robot in that book of yours. The one who slaughtered humanity, of all things.” Despite knowing better, Dr. Ambika Sen could be somewhat superstitious. “Least you could have chosen Primus, the book’s new Adam – More appropriate, considering what the stuff can do.” She rested on her husband’s shoulder. “Oh Turhan, I’m frightened. Do we have a right to do this?”

Dr. Korelia gave his wife a comforting kiss. “I don’t care if a Jinn, or an Angel breathed such knowledge into my ear. Or for that sake, if it were no more than, dumb, random fortune that revealed it to me. Radiun90 will let us have a child, and that’s all I care about.” Ambika’s sterility troubled them both. Turhan knew his wife thought of herself as less womanly for being so plagued. This hard reality drove Dr. Korelia in his effort to try and build a functional artificial womb. Little did he guess that along the way, while trying to come up with just the right environment for the womb’s membrane, he’d invent, what for all intentions was synthetic DNA. A material that could not only let them gestate a baby, but also make that child, the prototype for a new humanity. A transition from genetic engineering, into biorobotics. Actually the discovery surpassed even that. Raidun90 was like nothing ever before seen on Earth “Look around my wife,” he gestured at various petri dishes, test tubes, and scraps of mixed together biological matter which preceded his discovery, when they’d been working only in conventional genetic manipulation. “All these attempts, failure. Malformed, horrid things.” He sighed. “I don’t think we’re meant to do it that way.” He nodded at the replicated bat. “Whereas Garuda there, she is a work of art. More than perfect.”

“Yes, but will she…” Ambika bit her lip. “Will our child even be human? I mean, she won’t have any biological connection to existing branches of animal life on this planet.” That remained a somewhat abstract, yet unsettling idea to her nonetheless. Though, a logical conclusion from out of that same thought bothered Dr. Sen slightly more. “Even us –”

“The Radiun90 can mimic DNA molecules, not exactly splicing helix strands together, Our conjoined blood will suffice as a template to work from.” As if seeing her fears, Turhan added. “And don’t worry, I’ll show you how to use the Hammer, and Forge, so you can help me manipulate the program that we shall inject into the raw clay.” One of the other things Turhan Korelia learned, he needed a new set of tools in order to interface, in a very hands on manner, and bring Radiun90 to its fullest potentiality. And so he fashioned the Hammer, and Forge, which permitted him to program, map out personality traits, physical progressions right through into adulthood on an IRAD Circuit. Which is why working with Radiun90 was much more akin to construction, then any sort of gene splicing. You could foresee your end product, and therefore tweak it before you engaged inception. “She won’t be the result of a monastic conception,” technology into empyrean artistry. “We’ll both model the clay.”

“But,” Ambika repeated. “Will she be human?”

“What does it mean to be human?” Turhan asked philosophically. “She’ll bleed, breath, eat, love, and likely despair, just as we all do. Biologically, unless someone knew what to look for, they’d never think her anything other but human.” He reminded. “As long as they don’t look too closely under the chassis of course… If we’re going to do this, we might as well upgrade the plumbing.” A flash of fatherly insight. “We should account for flaws.” Scientifically minded he said. “No system can be perfect, so they’ll creep in.” And paternalistic. “She’s prone to stand out from other children, we may even need to be a little more… Strict in her upbringing. Others possibly could not value our little hope for her singularity.”

Ambika mischievously shoved her husband. “You’re an old softy, and you know it.” Her mood brightened. “I’m afraid I’ll have to be the stern mother, always reminding our genius daughter not to show off.”

Korelia let out a mirthful laugh. “Just was thinking,” Turhan could hardly contain himself. “The moment when we have to explain to our future son-in-law, that his gorgeous girlfriend, isn’t exactly, well, technically, a part of the human race.”

“Ah, so you’ll think she’ll be able to reproduce?”

“Of course, provided we put all the pieces, molecular, or otherwise where they belong. I don’t see why not.”

“About that would be son-in-law.” Ambika said severely. “If he’s worthy of her, what she is won’t make a least bit of difference to him.”

“What are we going to call them?”

“Them?” Turhan cocked a bushy brow.

“This synthetic human which we’re inventing.”

Turhan stroked his beard, thought. “Since you don’t care for my designations, you choose a term.”

An accumulation of books caught Dr. Ambika Sen’s eye. One small volume, which lay tattered atop of the badly heaped stacks of novels, and reference materials, gave her an idea. “Morningstars.”

That made Turhan perk up. “Oh, so you’re being Promethean.”

“And why not?” It had actually been Mary Shelley’s Frankenstein which had sparked this notion for Dr. Ambika Sen, her favorite novel. Morningstars, light stolen from the heavens. “Prometheus fashioned man from clay, and brought fire from the gods in order to empower mankind in his advancement. That is literally what we’re doing here.”