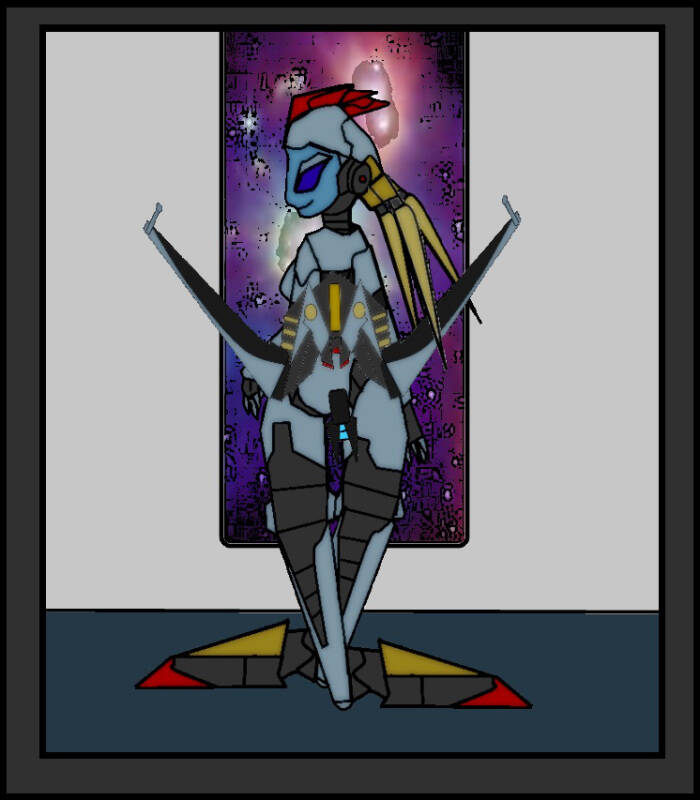 A Gunstar, relishes her ability to traverse the cosmos, and takes pleasure in her planetfall.


Light from the legendary orange giant, Aldebaran washed over the Gunstar. The sensation tickled her, and she gently sighed. Telecommunications from the inhabited planet, officially labeled Aldebaran II — Known locally as Kurgardstan, registered on her scanners. But the Gunstar wasn’t in any hurry to land. Humans had no idea, and most Morningstars, or even Falcanians themselves, only just on the cusp of perceiving the resplendence that existed beyond their limited awareness could properly appreciate what it felt to ride the stellar winds. The Gunstar, in her numerous journeys had seen Gamma Rays, tasted dark matter, and heard X-rays.
The Gunstar glorified in being a machine.

A whisper of gravity pulled her closer.
Aldebaran II’s atmosphere became flame on her ceramic alloy skin. But it did not burn. The Gunstar felt a thrill as she navigated a guided drop. The violet hued planet raced upward. Breaking-thrusters discharged. Almost hitting hard deck, she banked, and swooped to face a walled city — Tantalon. There she lingered, above tarmac lined with lights.

The Gunstar’s configuration changed. Ornithological correctly described her Mecha body. Sort of, humanoid-bird. Nosecone became powerful legs and talons. Recurved wings rested on her back. Even a pointed tail stub could be seen at the join of her plated, shapely bottom. Given the rather generous proportion of her curved chest plates, there’d be no doubt, this Gunstar was intended to be all female. Bright-blue almond eyes dominated the Gunstar’s elliptical head, crested by crimson plumage. Coppery wires dipped mid back. A bump for a button nose and a pleasant slit served for mouth, on an uncomplicated, yet graceful face.

The Mecha strode toward the city. Each step, she assumed characteristics and dimensions of a gorgeous, voluptuous, halo-winged woman. Plated pincer-tail flexed proud, like that of a cat’s. The Gunstar acquired skin, hair, and other humanoid features. Auburn curls marred by a white streak flowed ethereally in Aldebaran II’s warm evening breeze. Enhanced blue-eyes pierced darkness of night. Elvish ears tuned into the city ruckus. Anyone who might have been watching for a moment, probably might have believed her nude. Yet only for a second. A sleek cerulean one-piece, that looked as though it were painted on soon, clothed her form, completed by stylish, yet functional claw-boots. The Falcanian woman, both a Mecha and Gunstar, entered Tantalon City.