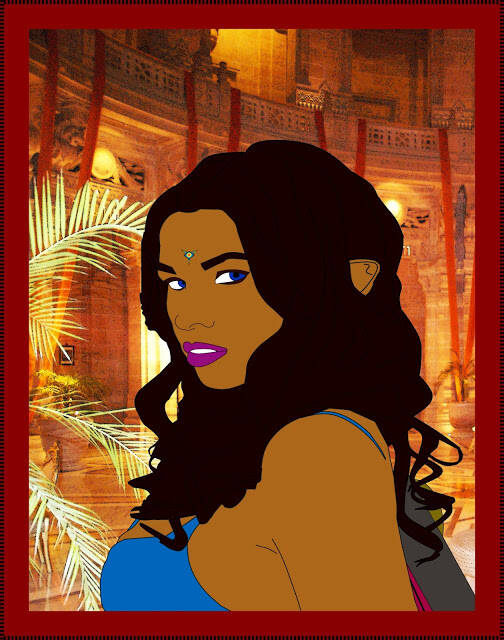 Sharr Khan, and his wife enjoy a private carnal moment during an official event.

Sharr Khan drank his tea, its smoky bite and citrus tang stimulated his taste buds. The Shotar considered, he’d need to commission more of this succulent blend. Gathered for a casual brunch before going off to inspect Numai, the Shotar sat beside Raj Naresh Singh, inside the Kuras mansion’s comfortably furnished lounge. Sharr Khan took notice of Damianus Vorskrai, and followed the Guilthari lord’s lustful gaze.

Ear tips peeked out from beneath twists and ringlets of her elaborately arranged auburn hair, which hung suggestive, over bare shoulders and back. Nadia Korelia’s magnetic presence commanded the room. Scandalously short, flirty, blue babydoll Summer dress clung to her every contour. Nadia’s bountiful breasts heaved at each regular breath, seemed as though they just might pop out. Knee-high, chunky black claw-boots, made the ensemble, combat chic. Nadia couldn’t help but ooze sex appeal, she’d been manufactured that way.

The Shotar put down his mug, and excused himself.

“I agree.” Said Nadia, to Naresh Singh’s technological adviser. Brains and beauty. “The scientific method is the bedrock of authentic advancement. So much the pity, that in the last century and up to our current time, ‘scientists’ favored ideological agendas, when they could have instead offered pragmatic solutions to real problems, rather than pursue unsupported ecological Doomsday scenarios. Which, more often than not were proven wrong by uncorrupted data.”

“I need you.” Sharr Khan said, took his wife’s elbow, and abruptly escorted Nadia away from her discussion. Good thing for Naresh Singh’s technological adviser, as Nadia was about to share her thoughts on Darwinism.

Outlined by dusky kajal, luminance blue eyes peered teasing toward her husband, who’d removed she and himself from the lounge proper, off into a side sitting room, really, almost a closet. The bindi, a three point star and diamond, glistened between her eyes, as she grinned. Nadia called it, her ‘Unicorn Star’. An embellishment, reserved for posh occasions, which at the moment, tremendously added to her naughty coquette look.

The Shotar backed his wife against a wall, which induced her to let out a breathless sigh. “Are you aware,” asked Sharr Khan. “Damianus Vorskrai was overtly leering at you?”

“Jealous?” Nadia quipped and felt his fingers creep up under her abbreviated hemline.

“No.” Sharr Khan pushed his mouth onto her lush pink lips. “You’re mine.”

Under her dress, the Shotar moved his thumbs, found the elastic of her white panties, clutched her rump as she lifted a claw-booted leg to wrap around his armored body. “You’re going to bang me, here in the closet?”

Luckily, his formal Jodtok armored vest wasn’t overly complicated to unlatch. Nadia busied herself with the zip of his jodhpurs and gripped Sharr’s hardened, pulsing phallus, guided it upward, to meet where her underwear had been moved aside. He slid into her.

Following an exquisite climax, which in all probability, those gathered out in the lounge got an earful of, Sharr Khan let go his wife, who reached for a Kleenex, in order to clean herself up as best as she could. Nadia straightened her panties and Summer dress and exited.

“Your Grace.” Said a Valküri upon eying Nadia. “Dr. Korelia, is looking for you.”