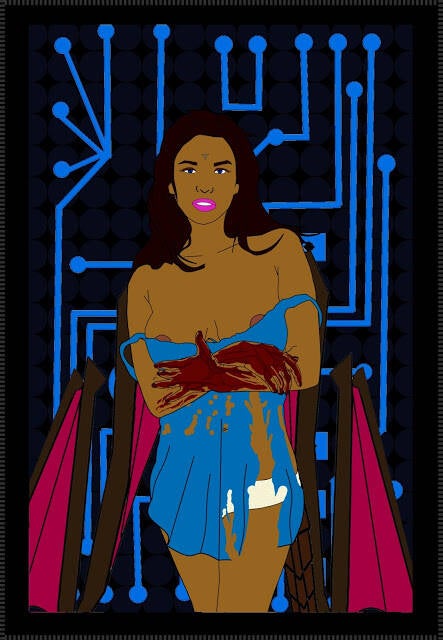 “Allahu Akbar, death to all abominations!”

The Kalashnikov, SR-70 Taigan Pistol was an exquisite gunmetal-gray curve. A radical departure from the gunsmith’s classic AK-47. Semi-automatic, the SR-70 Taigan’s four heavy barrels fired a scatter of bullets, that hit with an explosive concussion.

Sikh soldiers, appointed by Raj Naresh Singh, to escort his Falcanian guests, who visited in order to inspect rebuilding efforts which they helped spearhead of the city that before World War III and its destructive bombardments had been named Mumbai. The Sikh, during the abrupt rumble of gunfire placed themselves between the lone attacker, shoulder to shoulder, beside Falcanian Drakorian Guard, ThunderStrike battledroids, and Valküri.


Nadia pushed past her own bodyguards, both Mecha and Valküri. During the salvo of gunfire, among those struck were her husband, Sharr Khan. Drakorian Guard immediately secured their Shotar inside an armored vehicle. Nadia noticed her Papa, Father-Creator, Dr. Turhan Korelia go down in a second hail of ammunition and realized Turhan lay dead, his stylish shimmery blue Nehru jacket reduced to a spatter of blood and gore. Probably the only thing that saved her husband, Nadia concluded, was that Sharr Khan chose to wear his formal armor.

Ignoring urges from her Valküri, to seek cover and the hulk of battledroids that placed themselves between she and the attacker, Nadia advanced on the enraged Muslim, who apparently wasn’t too keen on the genetically engineered Falcanian presence.

Wrenching the gun away, Nadia crumbled it and threw the broken SR-70 Taigan Pistol aside. For a moment, she considered the confused assassin. Evidently dumbfounded to discover Nadia to be more than flesh and blood. That’s because, Nadia had been manufactured of sterner stuff. Her embryo hammered from raidun90. A material comprised of no scant quantity of moissanite – Silicon carbide — Machine, given flesh.

Nadia grabbed hold of Turhan’s murderer by his face, forced him onto his knees. Though he tried to fight back, her superhuman strength could not be matched by no less than that of her Morningstar brothers, or sisters. Lost to overwhelming grief, Nadia’s next movements were reflexive. Crush! The slightest pressure of her delicate, precision fingers and the assassin’s skull cracked. Killing him in one agonizing, bloody instant.