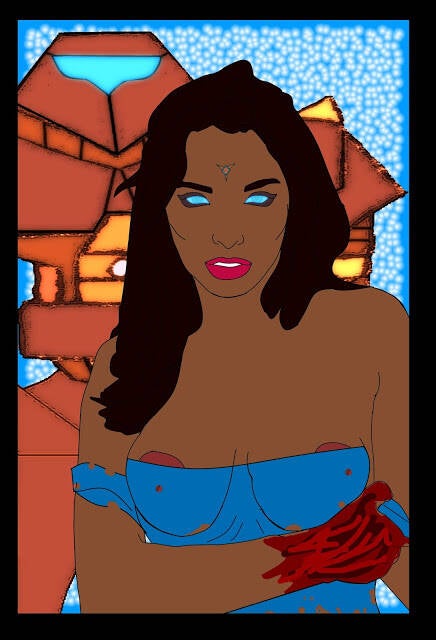 The Shotar, comforts his wife following the bloody incident in Numai’s streets.

Behind Nadia, the broad frame of a bucket-head, blood-red ThunderStrike battledroid levitated. Off to her side, an arm gently placed on the Queen’s shoulder, a Valküri adjutant, escorted the distraught Nadia to where her husband Sharr Khan, already had been safely secured in an armored vehicle during the thwarted assassination attempt.


Sharr Khan leaned toward his wife, her eyes beginning to revert to their normal bright blue state as she stepped up into the heavy transport. Ethereal cerulean gown, a bloody, tattered wreck fell off one shoulder. Shredded from the gunfire that she’d, moments earlier, walked into. As for the blood, none of it belonged to Nadia.

Nadia got in, and her Valküri closed the door.

The armored vehicle rumbled as it kicked into gear.

In all the years Sharr Khan knew his wife, never once did she abuse her superhuman Morningstar muscles against that of other sapient beings. If she so desired, Sharr Khan understood, Nadia could hammer a human into an unrecognizable pulp. What she did to that attacker, bare handed, crushing his skull, hardly touched upon her complete potency.

“He, murdered my Papa, wanted to kill you…”

The Shotar grabbed a blanket, placed it around Nadia, who began to shiver, and lower lip tremble. He’d also never seen her lose control before, ever. In her own words, Nadia considered herself a precisely calibrated machine.

Tears flooded from clear bright blue eyes, down over her cheeks.

“It — It will be alright.” Sharr tried to reassure.

Of course, Nadia’s positronic brain wasn’t like that of an organic mind. It never failed.

“No.” Nadia moved her hands underneath the blanket. Her Valküri attempted to clean off as much of the blood and gore as she could, yet the stain and specks of brain matter clung. “Don’t get any of it on you.” She began to cry even more.

The Shotar embraced his wife, stroked her disheveled auburn tresses as she supported herself on his chest and sobbed.